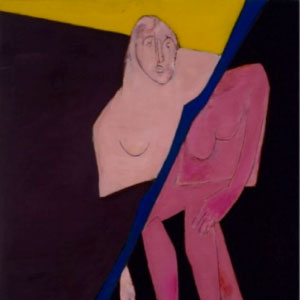 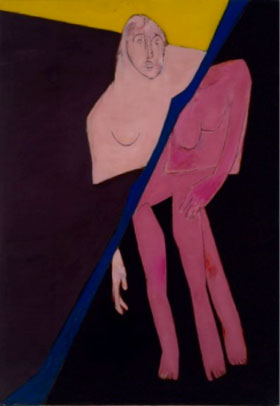 ‘The Diagonal’ by Tyeb Mehta

Once upon a time there was a lumberjack living in the midst of the redwood forest in Orick. He was as tall as a tower but since he lived among redwood it didn’t make any difference. He couldn’t remember his name, but since he lived alone in the middle of nowhere, this seemed of no importance either. He had stooping broad shoulders and it looked like his eyebrows were curved down as a sign of empathy with them. His lips were thin and his teeth impeccable.

He had always worked hard, as far as he could remember, chopping wood, sanding the planks and assembling them in order to build a perfect cube house.

One October morning with the first rays of an orange sun, he woke up and got ready to cut wood diligently. That day his endless dissatisfaction with the final form of his home dissipated slightly when a few raindrops landed softly in his light chestnut thinning hair.

A blow of humid wind slapped his friendly sad face. He glanced at the sky and knew there was going to be a mean thunderstorm. Soon the sky clouded over and turned dark blue.

The storm began as a mild shower and the lumberjack took off his checked black and red shirt, closed his eyes and enjoyed the rain meandering down his face and torso. He sniffed the aroma of the wet wood and the wet earth and felt at ease.

Soon the drizzle became a torrent and then is when a very odd event happened; The drops of rain had turned into drops of glass, and their shape had molded into a perfect rhombus, and these strange drops began to grow bigger and bigger until they turned deadly dangerous.

The lumberjack run to his nearly perfect cube home and shut the door behind him. A deafening roar filled the room. A huge drop had fallen on top of the house slicing it diagonally into two even triangular prisms.

The lumberjack stood motionless, jaw dropped, and a mix of rain and sweat poured down his torso, getting inside his lumberjack boots making his toes wet cold.

“When the drops stopped dropping the storm started stopping”. A ray of sun slipped away between two clouds and shinned in the glass surface. The lumberjack saw his reflection distorted by the tears in his eyes.

He put dry socks on, wore his lumberjack jacket, went out to the woods and climbed up the highest redwood tree. In the distance he could make out smoke coming out of a stack. He stared into the wavy white line dividing the turquoise blue sky into two even parts.

He set foot on a muddy trail and didn’t stop until he found himself.