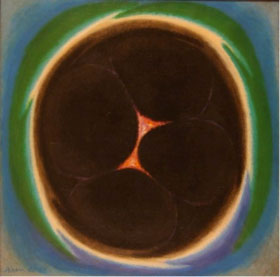 Nathanyu was canny like a freshly sharpened pencil tip, his blueberry black eyes, would jump from pebble to pebble, from stalk to flower, from tadpole to dragonfly, always in the search for the next adventure. His face, coated with freckles, was always chummy, and it was framed by a tangled mess of curly ginger hair.

He was born in the river, and he had been abandoned by his young mother in a carrycot filled with nuts and honey, many, many ,many months ago.

By the time his lean body surpassed the size of his basket-home, he learnt how to swim, helped by the pond skaters.
One summer dusk while he was trying to catch a firefly, he was swallowed by a giant doctor fish.

As days passed by he kept finding intriguing things to play with. He crawled over the intestine and found behind the liver four chocolate brown eggs. Nathanyu was mesmerized by them. They were very shiny, heavy and wobbly. Suddenly his attention shifted to a sound that seemed to be coming from outside the gills.

He wrapped the eggs on the saffron blanket that had been his bundle as a baby, and which he wore around his waist, and walked toward the muffled sound.

Above the doctor fish, on the surface of the river there was a boat and a young couple engaged in a woeful conversation. The young he lover was trying to comfort her with delicate words. She could not bare children and the sorrow was creeping inside her brittle bones.

The young she lover, kept weeping and each tear would make concentric waves that grew bigger and bigger, swaying the water and making the doctor fish sleepy.

Nathanyu started buzzing around the belly, he took the four eggs out of his saffron cloth and began to juggle them. The doctor fish contorted and catched the attention of the young he lover. He saw the magnificent fish dancing in the bottom of the river. Since they were very poor he thought it would be of great value in the village’s market and they could get by through the winter months.

The brave young man immersed himself from the waist down and tried to seize the fish with he’s strong arms. He struggled, he fell into the water and eventually he emerged triumphant with the doctor fish under his right arm. The whole episode had made the young she lover laugh, and she helped him out to shore with the paddle.

She wrapped the big fish with brown paper, tied it with a string and walked towards the town’s main square. On her way she passed near a group a women bringing bright white lotus flowers to Durga, the Divine Mother of Creation. She felt compelled to give the big fish as an offering to the Goddess. She felt torn. She knew how much they were going to need the golden coins in the near future.

But the songs and the prayers of the other women enticed her to the street temple, and she placed the fish next to a stone altar.

In front of her big pale blue eyes the doctor fish started an awkward dance, its mouth slowly opened and the four chocolate brown eggs rolled out followed by Nathanyu. “Hola” he said to the young she lover.

She smiled. The heartiest smile. No other words were uttered. The little boy hooked his tiny hand to hers and they walked slowly home, without being able to take their eyes of each other’s.