Bedtime story inspired by the artwork: 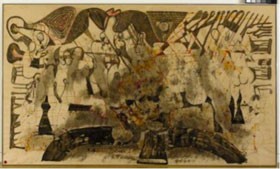 Latta added a log to the bonfire and a blaze lighted her wrinkled face. A branch crackled and hundreds of red dots of light scattered upwards mixed with the smoke. Her ancient eyes followed the dots up to the skies. It was a starry night.

She fidgeted on the rock she was seating, and adjusted her wooden leg. Once she felt comfortable she began to whistle a native song.

She heard a jingle, turned her head and saw coming around the rocky hill a blind young woman guided by a big green eyed, chubby little girl. They approached the bonfire and before Latta could say anything the little girl introduced her plump little hands inside the blind woman’s sac and produced a bag of juicy black cherries.

She left them next to the old woman’s odd-looking leg. And ran back to hug her mother’s leg. Latta smiled showing her uneven teeth filled with gaps. She motioned her hand pointing to her right side as a welcoming sign, then she grabbed a bunch of cherries and crowded her mouth with them. The little girl wondered if she was going to fire at will the pits through the black holes of her teeth. She moved to the side pulling her mothers robe.

The blind’s woman’s face looked familiar to Latta, but she could not make out where she had seen her before. Maybe at the market place of the big town at the West bank of the river? Maybe begging in the streets? She could not remember, but she enjoyed having their company so she started singing. Her voice was amplified in her chest cavity and the unfamiliar words resonated through the whole valley reaching the stars and vibrating inside mother and daughter’s hearts.

A few songs and many cherries later, another shadow walked around the rocky hill. It was a short man. An uncommonly short man. His legs and torso were not taller than the little girl’s height, but he’s face was that of a grown up man, with lots of facial hair, almond like hazel eyes and an oddly broad forehead. It looked as if someone had yanked him out of his mother’s womb by his hear. He greeted the women shyly, then he thought of turning around and leave, but before he finished that thought the little girl tweeted: “Another friend”. Latta admitted him with her warmest crooked smile and he sat with them sharing the light of the fire. The midget man took out a mandolin from a white leather bag and accompanied Latta’s song. Mother and daughter followed the rhythm clapping their hands and stomping their feet, adding the harmony of the jingle bells tied at the mother’s ankles. By dawn, a parade of ‘differently abled’ people had joined the festive group. There was plenty of food, music, songs, old stories, sad accounts, happy ones, jokes, merriment, laughter and companionship…

In many different ways, all these men, women and children had been the offal of society. They had been repudiated, discriminated, laughed at, humiliated, because no one before had been able to see their essence. They could not share their inner talents anywhere else before, and nobody had cared for them as Latta did.

From then on, Latta’s bonfire became the meeting point of the most varied people of the valley and they felt at home.